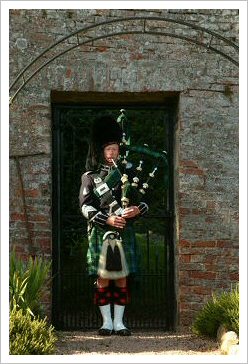 I have been playing The Great Highland Bagpipe for over 30 years now, both solo and in several Pipe Bands.

I was initially taught by the late John Nichol of Edinburgh and over the years I also received tuition from Duncan MacDonald (formerly Cameron Highlanders), the late Pipe Major Evan MacRae (Cameron Highlanders) and for 6 years (until his death in 1992), the well known piping judge Mr Norman Meldrum. In addition I have also completed various short courses with other prominent pipers.

For 10 years (1989-99), I was also a personal piper to HM The Queen at Balmoral Castle. This involved piping at many formal, informal and private occasions: dinners, dances, parties, birthdays, barbecues and at the wedding of HRH Princess Anne and Commander Tim Laurence in 1992.

On numerous occasions, by invitation, I also played for HM The Queen Mother at Birkhall.

Since leaving Royal Service I have been invited back on a regular basis to Balmoral to play for HM The Queen twice each year. This continues currently.

Some other events that I have played at include:

and many other weddings, dinners, birthdays, funerals etc.

Besides playing with various pipebands in the UK I have also played as a guest piper with Queensland Irish Association P.B. in Brisbane, Australia, which has involved me playing at ANZAC Day services, various parades and concerts including The Lord Mayor's Concert for the Bali Bomb Victim's Appeal (November 2002).

I was resident piper at Strathtyrum House until 2017, Strathtyrum is owned by the Cheape family who have strong piping connections going back many years. I am currently based close to St Andrews.

I am also available to teach piping from total beginners upwards.

If you would like any further information or to make a booking, please don't hesitate to contact me.

Please feel free to contact me by phone or e-mail to discuss any ideas or requests you may have.

Although I am based in St.Andrews, any other location will be considered.

I am also a frequent visitor to Australia where I am hospitably looked after by Piper Gordon Ferguson of Queensland.